What I've Learned From Link 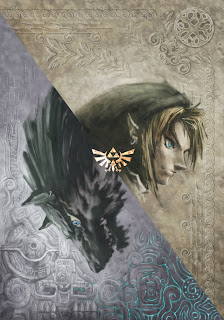 If you've ever owned or been around any Nintendo game console, the name Zelda is probably familiar. The Zelda franchise is one of Nintendo's flagship games. No matter what console, there has been at least one Zelda game available. I've been playing it for, well, longer than I'm going to admit to. Anyway, we have the latest version for the Wii - "Zelda Twilight Princess."

The story doesn't vary too much, it pretty much centers on the hero, Link, who goes from being a simple village lad to becoming a hero. He goes through a journey, gaining wisdom and skills as he defeats monster after monster. This latest incarnation is pretty elaborate and the story has more to it. An evil empire of shadows has taken over the kingdom of Hyrule and is creeping over the rest of the light world (this story hasn't changed in 20 years). Link is the only one who can stop it. Princess Zelda is a prisoner of the shadows and her people are bodiless spirits trapped in a twilight world, cut off from their reality. Link goes through his journey freeing these people and conquering the twilight through a series of tests.

I find this game compelling for many reasons. I'm a video game geek anyway, but my addiction to storytelling makes this a match made in heaven. Also, I like the simplicity of the story and the hit-you-over-the-head meanings. For example:

The Journey: As you know, I have a "thing" about hero's journeys and Link's adventures personify the whole thing so well. From callow youth to full-blown heroic man, he has to go through a long journey fraught with danger to achieve his goal. The Zelda games are as simple as it gets, they all have a journey. But obviously it resonantes with people, these games have been around since 1986 and is published in many languages. Journeys appeal to people. As a writer, it is important to realize that and to know that as complex as your plot gets, having a clear, simple journey is a solid basis for your story.

Goals, Motivation, Conflict: Again, very simple but simplicity helps us understand. In Zelda, Link has a mini goal. For example, he needs to go into the twilight to defeat the shadows. So his goal is to conquer a temple or a forest. Motivation is the freedom the land and people will have if he is successful. The conflict is that he becomes a wolf in the twilight and it is never certain he will return to his human form. The game provides you with a choice each time you enter the twilight. I always pick "yes" because when it comes to video games and cheesecake, I'm a girl who can't say no. But this breakdown of a writing concept into a simplitic form shows you the strength of what you can do with your own character. It illustrates the concept of GMC in an obvious manner.

Secondary Characters: Oddly enough, the earlier versions of this game were pretty solitary. Link was pretty much on his own. In this version, he is surrounded by secondary characters and their place in his journey are very clear. In some situations, he can go no further in his journey without their assistance. They provide his motive and his conflict. They make his plight much more sympathetic. They aren't complex characters, but they illustrate to a writer the value of what they can add to a story.

Black Moments: This game is one black moment after another. Link's triumphs are always followed by a black moment. He is rewarded for his valor by being put into another miserable situation. Fortunately, the miserable situation leads to another set of challenges. And that is what a black moment does for our characters when we are writing. Our characters can either crumple or rise to the occassion. The more miseable the black moment, the greater reward when our characters accept the challenges it presents. In the game, the moment is very simple. Damsel is kidnapped, kid is greviously injured, etc. etc. But the affect is the same as what we have in our novels and it is up to Link to do with the situation what he will. If you want to win the game, you will proceed and accept the dangerous challenge presented. The biggest black moment was when I accidentlally erased my file and lost all my progress.

There are a bunch more, but I'm only a 1/4 through the game. Supernerd is ahead of me. Unfortunately for him, I'm hope while he's at school and I should be breathing down his neck tomorrow.

My point is that there are writing workshops all over. We can learn things from whatever we are doing. And while playing a video game can actually be a monumental waste of time ("Wario SmoothMoves" is totally a waste but a helluva lot of fun) it can have its value.
Posted by Rene at 2:04 PM