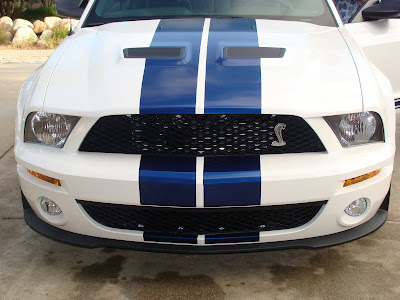 Looks like I'll be going to San Francisco in style this summer. This is hubby's new toy. It is a Ford Mustang Shelby GT500, quite a mouthful but a phrase I've been living with for over two years.

My husband is a car guy. The man bleeds Ford blue. I remember the first time I saw his original mustang (a 1988 LX 5.0) I was taken aback by how clean it was. You could eat lunch off the motor. The timing of his wedding proposal to me was linked to the fact he couldn't get a certain car part, so he bought an engagement ring instead. He subscribes to at least 5 "different" car magazines. I put that in quotes because they all look the same to me. He assures me they are unique. Yeah, right.

He's been looking and waiting for this particular car for awhile. When the Shelbys were originally released, the dealers were able to get $25K over sticker. DH will not spend a penny over sticker on any car, it's part of his moral code, like not committing murder or not putting ketchup on a hot dog. So he has had to bide his time. 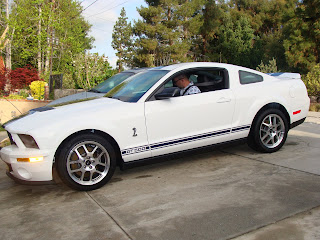 Finally he found a dealer who would sell it to him at sticker. He flew up to Sacramento Tuesday and drove it home. It was like Christmas morning around here yesterday. I've gotten to drive it once. It was fun but it is wicked fast (not our fastest car, however) and it's 6 speed stick shift. I don't like driving stick.

Anyway, that's our new toy and hubby's drooling obsession can end. Except there is that new Bullitt Mustang.....
Posted by Rene at 8:40 AM