Our weekend was ghastly. Very, very hot. And while I don't mind the heat, I do mind it in May. I expect this kind of stuff in July and August, but not this early. The mercury hit triple digits in my area and I, in my stubborness, refused to turn on the a/c during the day. Actually, my downstairs never went above 77 which I can live with. The upstairs is another story, when I went up there Saturday night, it was 90. During the day, I don't care since I don't go up there and the kids usually hang around downstairs anyway, but at night I caved and turned the a/c on. And just as we acclimate to the scorching temps, they are going to drop back down into the 70's later this week. I think I hate that most of all. 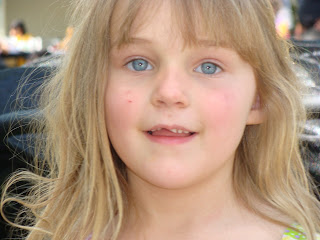 Summertime anxiety is starting to set in. I'm not sure what I'm going to do with the kids. I always start with a plan and then it falls apart. Unfortunately, kids are so unpredictable and they are the perfect, shining beings you hope for. I have these fantasies of my kids eagerly participating in educational activities or fun crafts, killing a couple of hours and then it is time for lunch. After eating a nutritious meal prepared by their loving mother, they immerse themselves in outside play for another couple of hours then come in and tidy up their rooms and the toy room, leaving us with an evening for television or video games. The truth of it is that my two girls have the attention spans of gnats and any activity they indulge in loses their interest within 20 minutes. They are clever enough to make their own lunches, ignoring whatever I've suggested. It gets too hot to be outside in the afternoon and they spend the afternoon entertaining themselves by whining or fighting. And cleaning up their rooms and toy room? World War III, everytime. They do spend the evening watching television while I collapse on the couch and drink too much. I don't know what the secret is. I scrounge for fun ideas and try to make things fun for them, but the summer ends up being very disappointing. At least for me. It doesn't seem to bother them a whole lot.