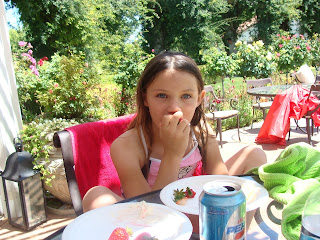 Summer should be a relief after the last two weeks of the school year. My kids' school takes those last two weeks very seriously. The activities are non-stop. Thing had a big musical production. 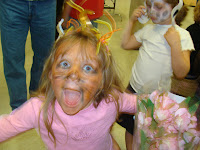 Her kindergarten class put on a play of Aesop's fables. Very cute but had me running around for a couple of days. There were last minute field trips and book fairs and a "fair" put on by the classes which required parental participation. During all of this, I was also working. The last day of school couldn't come soon enough. This was Supernerd's last year in elementary school and they had a big send off for the outgoing 6th graders. 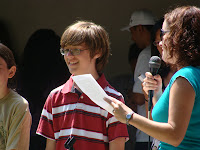 I held it together for the most part until I saw all the other kids crying. His classroom is multi-age with 4,5 & 6 graders. The younger kids were devastated to see the 6th graders go. Some of the little girls were inconsolable. It was really touching to see how close these kids were. And not just girls were crying, the boys were too. I'm hoping these strong bonds will carry over into jr. high, these kids are going to need it.

Anyway, onto the cruel part. As you can imagine, I was so happy for that first day after school ended. And it was nice. Father's Day was coming up and I was hosting. I prepped for the day and was ready to go. Both my husband and Thing got sick that Saturday night. We had to cancel although I'd already defrosted the food I was going to cook. I ended up cooking and sending the food over to my inlaws. Hubby was in bed for two days and as soon as he got better, I got it. It took me all week to start feeling better. Then the triple digit temps hit. While we expect those in August and September, June is a little early. I hate running my a/c. All I can envision is the electricity zooming out of control. Plus, when you don't feel well the heat is even worse.

But it is a new week and the weather has improved. I'm feeling better and hoping to get back into the swing of things.