We Can Put a Man on Moon 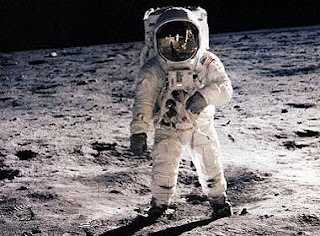 Forty years ago a momentous event happened. Mankind walked on the moon. It was an amazing event I find hard to comprehend. I don't remember the event, I was only two. I don't think I appreciate it as much as I should. In a world of wonders, its hard to keep sight at how truly a wonderful occurrence it was.

In a world where companies like Industrial Light and Magic make it all look so real on the screen, the moon landing seems so unglamorous, so simple in comparison. But I think it was the key to unlocking our imaginations about space. It has ingrained itself in our consciousness, an assumption that we can do anything. It's good that we can think that way, but I fear the younger generations won't appreciate the supreme accomplishment of the Apollo 11. Eventually we are going to land on Mars. How incredible will it seem to a generation who has been to Tatooine? How incredible will it be to kids who have traveled at light speed?

I think it is important to make our children understand how important the moon landing was in the big picture. The thought that we could actually leave earth and land on someplace else should seem much bigger than going to the grocery store. We are jaded by the bad things we see. Why should we be spending money on space when there are so many terrestrial issues which need our attention? How can we be worried about worlds beyond ours when we have so much to worry about on our own? Valid questions. We are explorers, we quest for new knowledge. We seek new places and look for new answers. It feeds our imagination. It empowers us. And if we can put a man on the moon, we can, eventually, do anything.
Posted by Rene at 7:36 AM