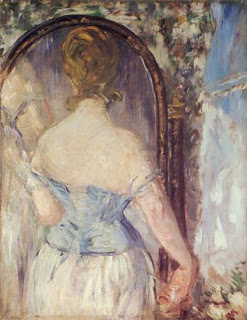 Once a year or so the media gets onto an images kick. Usually it is from some event. This time around it was Glamour's use of a plus-sized models. On top of that was the Ralph Lauren debacle. Everyone is demanding regular sized women should be featured. Girl's self-images are being distorted by the pictures they see in magazines.

If a young woman is basing her self-esteem on an image of a model in a magazine, there is a lot more going on.

When I was first in college, Jean Kilbourne lectured about the images of women in the media. Not just weight but also the need for perfection in every way. I took it to heart. She made some brilliant points and I think there was a lot of truth to what she said. That was over twenty years ago and honestly, I haven't seen any change.

I'm not saying that the images of women in magazines are okay, I'm saying that these images only hold the power we give them. Women have been seduced by fashion since the beginning of time. We love pretty clothes, awesome shoes and glittering jewelry. We like to be attractive. Its natural. But our exteriors are the least of our personas. They can change with our choices. They change with age. True beauty really is what is inside of us.

Yeah, a platitude which seems empty. But I'm not talking about sweetness and light. I'm not saying we need to be Mother Theresa's inside. But I do thing we need to encourage our daughters to develop themselves in as many ways possible. Sports, art, music, academics, all of these areas are based on our own abilities, our own efforts. Models are born models. They are the result of genetics. For the most part, they've had very little to do with their own persona. And with airbrushing and photoshopping, the women who pose in those pictures are not the women displayed in the magazine.

Truly, I don't think it is Vogue's or Glamour's or any of the other magazines job to build up self-esteem. They are in the business of selling ad space. I don't think most readers of the fashion magazines have any pretentions of wearing the clothes they see. Even if we were all a size 0, how many of us are willing to spend $500 on a pair of jeans?

The photos aren't going to change. Despite the protestations, women are still buying magazines. Women are still buying the items advertised. It doesn't mean they are obsessed with the images they see. It doesn't mean they want to be just like the girls in the magazine. They like the pretty clothes, the awesome shoes and the glittery jewelry. And if they can't have them, they like to look at them.

Yes, there women who are influenced by the images. There are women who suffer with dieting so they can fit in those clothes. And I'm not confusing this with eating disorders. Girls I knew who had eating disorders had much bigger problems than pictures in magazines. But I do think we have a society which does tell us to focus on ourselves. Women who can afford the designer clothes which are being shown in these magazines need to find a hobby which takes them out of themselves. They focus on their image because (I say this cynically)they have nothing else to worry about.

My point is we should worry less about what the media says we should be worrying about. Your body image is only going to be what you let it. No one can tell you what to think about yourself. Looking to a magazine for negative and positive images is a pointless exercise. So what? Glamour is showing "real" girls. Still, they have little impact on me. My self-image is what I see in the mirror. I'm not looking for a Vogue model, I'm only looking for a person I am comfortable living with.

I have a new post on my other blog. Check out my book review for Soulless at Ainsley Park.
Posted by Rene at 11:05 AM