First, the remodel is going well. The plumbing is done (including my bitchin' pot filler above my cooktop) and they have placed a bunch of the cans for the lights. We've decided to add a skylight to one area. When I asked the contractor if it would add to the timeline, he said no, I was too far into panic mode as it was. Hopefully they will get to the drywall next week. 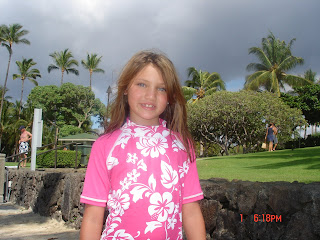 Hawaii was pretty uneventful and I really didn't take too many pictures since I've been to the exact same places before. But I do have a couple of stories. The first happened the very first day. If you have the soundtrack to "Grease" now would be a good time to play "Summer Lovin'."

My hubby and I took the kids to the beach the first afternoon we were there. Diva started working on a sandcastle straightaway. She loves working in the sand. Perhaps she will be an engineer when she grows up. Anyway, there were a few kids playing as well. One was a cute, blonde boy with a total Hawaiian tan. He and Diva hit it off right away. I watched them talk and dig in the sand. The girl is a natural flirt, not sure where she got it, it wasn't from me and her dad isn't too good at it either. The sun set over the ocean, turning the sand to a blazing pink and it was time to say good bye. In the car going back to our condo, she told me she sure liked that 10 year old boy. She wondered if he liked her too. I asked if she knew his name. Nope. Where does he live? Don't know. So her big summer time romance lasted about an hour. It was pretty funny. Her dad looked rather ill while she talked about the cutie at the beach.

She seems to have recovered. She is on boyfriend number 2 so far this school year. Her criteria for a boyfriend seems to be she has to beat them in arm wrestling. But I do wonder if at lunch she and her friends danced around a picnic table singing "tell me more."
Posted by Rene at 10:25 AM