So I've been working on a post expressing my exuberance of over the emergence of spring. The grayness of winter has left the southland, promising Beach Boy-kinds of days and the kind of sun that forces me to wear sunglasses. We got the convertible out of storage and I'd already driven it once. ONCE. Friday things changed. It started getting downright chilly. Last night it started raining. It's pouring right now. Ugh.

Anyway, the start of spring turns up the level of activities around here. The kindergarten classes at her school did a Medieval Day. Here's my little princess. 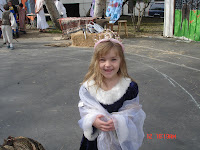 The teachers cordoned off the kindergarten area from the rest of the school and turned it into a village. They had a stage with a lutest, harpist, bagpipe player and a juggler performing. Parents put on workshops with various crafts and skills like paper making and grinding wheat. At the end the kids had a huge feast. It was really cute if a tad ambitious. 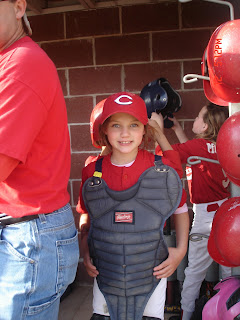 We are knee-deep in baseball. Hubby is coaching a team again this year. Some of you might remember we had a team with 7 girls on it last year. This year he decided it wasn't worth the controversy and drafted only two girls (Diva and one other). Didn't matter. Only 4 girls are playing in their division this year. However, the two girls on our team are two of the best players. When they play together in the infield, the are lethal. We get lots of comments. Usually its "I didn't know girls could play baseball like that." What the hell kind of comment is that? What are they supposed to play like? I better get off that soapbox or my "I am woman hear me roar" persona will flare up like a bad case of heartburn.

Supernerd was gone last week to Outdoor Science School. It was weird having my little boy gone for a whole week. He was cut off from his computer, video games, television, etc. He didn't even have time to read. I was worried. I half expected a meltdown. But he came back happy if a little (okay, a lot) stinky. He took one shower and confessed tonight that he'd forgotten to take his toiletries with him so he didn't use soap. And he only brushed his teeth once since he'd forgotten toothpaste. I mentioned that he could have borrowed a dab of paste from his buddies, but apparently oral hygiene was low on the list of things they were worried about.

Work has been horrible. Hubby had a summary judgement motion one week and a trial this week, ergo I was chained to the copy machine doing exhibits and creating trial notebooks. I can't tell you how much that blows. We need to get through April then it will be time to start interviewing my replacement. I wish his old secretary would come back.

Now the amazing thing is that I've kept up my writing. Unfortunately, that means my blogging shrank. Given 5 minutes to choose between writing and blogging, writing has won out. I've found by writing a little bit everyday, I've made real progress. And when I'm stuck, I make myself quit. Sure enough, the next day when I give myself 5 minutes, I am able to pick back up and continue on.

This week should be a bit more mellow. Trials are over and we have a lull before the next begins. Now its time to start focusing on that diet. The end of July will be here before I know it.
Posted by Rene at 9:38 AM No comments:

So I did it. I registered for conference. Haven't done anything else. Well, I have quit eating in the hopes of losing a few pounds before hand, but I haven't planned out the logistics yet. I'm not sure if I am going to drive or fly. Have no idea where I'm staying either. The conference hotel has sold out and if any of you are on the RWA loops, I'm sure you've heard
ad nauseum about that fiasco. I'm not too concerned, there are a gazillion hotels in the city, most of them two or three blocks from the conference. The bad part is that you must walk through prime shopping areas to get back and forth. I could easily get distracted on my travels.

My hubby is thinking of going. I'm 50/50 on this idea. Being a mother hen type, I worry that he won't have anything to do during the day. Yeah, I know, there isn't much to see in The City. But here is the big thing: in the 13 years we've been married, the longest we've ever been apart was three days/two nights. It bothers both of us to think we could be apart that long. I've been separated from my kids for over a week, but not my husband. I did tell him there would be no children on this trip. I don't think they would want to go anyway.

Anyway, I am signed up to go and I plan on going whether I'm by myself or not. Either way, I plan on having a good time.
Posted by Rene at 2:18 PM No comments:

Email ThisBlogThis!Share to TwitterShare to FacebookShare to Pinterest
Labels: conference

I went to my chapter meeting on Saturday. I always drag my feet about going, I'm not sure why. I enjoy the meetings and such, enjoy the camaraderie of meeting with my fellow writers and having an excuse to wander around a bookstore afterwards. I think my reluctance to go stems from my guilt over not writing. Who goes to a writer's group and doesn't write?

Our speaker didn't show so we filled the time in with other things. For me, that meant picking the brains of the other writers about my lack of writing. Shannon Donnelly is a very active member of our chapter and is one of the smartest people I know, told me I'm out of writing shape. I sit down, expect to write 10 pages then get disappointed because I am unable to accomplish my goal. I am setting myself up for failure. It made sense to me. When I'm writing regularly, I tend to write 5-10 pages a day. But that is wehn I'm in writing "shape." Shannon mentioned an article she had written about "writing muscle." If you are struggling with writing I recommend reading it, she makes a great deal of sense. She also helped me with a game plan for my next novel and getting myself back into the business of writing to sell. She's also pushing me to head to conference. So the next thing is to plunk the money down for conference. I'm hoping that will give me the impetus to get going on my writing.
Posted by Rene at 8:38 AM No comments: