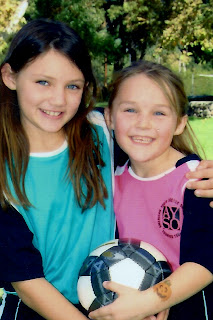 Saturday was soccer, soccer, soccer. My daughter had a game at 10 a.m. then another at 3:45. My husband ref'd at 8 a.m., 11 a.m. then a 1 p.m. game for another division. My daughter's team won both games so we play again next week. If rumors are true, we could be playing through January.

As you can imagine, I have mixed feelings. I'm really thrilled my daughter's team is doing so well. They are a great group of girls and they play well as a team. Its fun to cheer her own and I get caught up in the excitement. On the other hand, I do miss my Saturdays.

This is my first experience with this level of kids' sports. I wasn't much of a jock as a kid. I played softball for a few years but it was always pretty limited. Once your season was over, it was over and I was never good enough to extend my play. By 5th grade I wasn't into sports at all. My stepson was in baseball briefly and Supernerd did baseball and soccer for a few years. He really wasn't into it but we made him do it to keep him active. He's glad now because he can at least swing a bat in p.e. and understands the basics of soccer. But like his mom, he's a book worm and far more content at home with his laptop.

Diva is the opposite. She is a jock. It's tough to get her to sit down and read. She can read just fine, but she doesn't enjoy it like I do. She gets impatient with her friends when they come over and want to play video games when she wants to go outside and ride bikes or skateboards. This weekend I caught her asking her dad about the football game on television. When he gets home from work she demands he take her to the batting cages. The motion is constant.

It is odd having a child like this. Its good, I enjoy it, but sometimes it makes me dizzy.