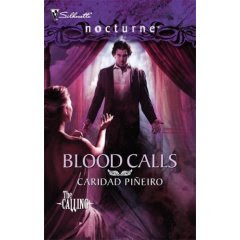 As some of you know, I'm a patsy for the paranormal. I like all manner of preternaturals like werewolves, goblins, faeries and Paris Hilton. But vampires hold a soft spot in my heart. Not sure why.

I'm not alone in my fascination. Silhouette has read this desire and is featuring the undead in their Nocturne line. The latest is Caridad Pineiro's Blood Calls

. This is the sixth book in an ongoing series.

Diego Rivera lost his life during the Spanish Inquisition, but when he is saved by becoming a vampire, he swears to become a better man. Ramona Escobar is a promising young artist who is struggling with a mother with Alzheimer’s and a disease that is slowly robbing Ramona of life. Ramona unwittingly becomes involved in an art fraud and when her life is threatened, handsome art gallery owner Diego Rivera comes to her aid. Attraction will flare to life between the two, but both Diego and Ramona are hiding secrets. When Diego reveals his true face to Ramona, she reveals the true of her existence – that she will soon die. Will love help Diego find a way to deal with Ramona’s betrayal and his own secrets, or is it the call of her blood that is tempting him to put the bite on her?

I was fortunate enough to ask Caridad a few questions about writing and the popularity of the undead.

As a writer, how hard is it to switch genres? Going from police procedurals to Latina chick lit to dark paranormal seems like a tough jump, how does you do it?

It is hard to switch genres at times, especially when you have deadlines for both books. I generally like to stay with each genre at one time, but that hasn’t been possible lately. When I am writing the dark vampire novels and romantic suspense, I am in one mindset and the women’s fiction mindset is very very different. For the dark vampire novels, I am concentrating on the paranormal elements and the psychic wounds of the protagonists. These psychic wounds will oftentimes impact on life and death situations. For my women’s fiction, the stories generally revolve around the relationships of women and while the conflicts there are life-altering, they are grounded much more in reality and do not have life and death consequences. They do, however, impact on the life courses of the protagonists. As for the suspense stories that I write, the focus there is generally on the romance and how the mystery impacts on that relationship. There’s actually more similarity between my romantic suspense novels and the vampire novels as both generally have a mystery and of course, romantic elements.

BLOOD CALLS is the 6th book in a series that started awhile back. Was it tough to pick it back up or has this story been floating around in your head for awhile?
I knew when I wrote TEMPTATION CALLS (October 2005) that I wasn’t done with the stories for some of the characters. TEMPTATION CALLS turned out to be one of my favorite books because of the characters and their very unique lives. From that one book, I’ve been able to spin off DEVOTION CALLS (January 2007) and BLOOD CALLS (May 2007) as well as FURY CALLS (tba 2008). I hadn’t planned on so many other stories from that one when I started, but as I wrote, I realized that there were a number of secondary characters that were so unique that I had to explore them in greater depth. Part of it is that I like to write series and always try to make the secondary characters so real that people want to know more about them. The one hard thing about this is that you need to keep them in the background and not let them overwhelm the main story.

I think people have always been fascinated by the otherworldly creatures and vampires in particular. There is the fascination with immortality and what it would be like to never die. We always imagine them as romantic and sometimes tragic creatures. We also think of them as very sensual creatures and the sharing of blood is definitely high on the list of intimate acts. For all those reasons, readers love vampires.

How is Diego unique amongst his kind?

In my mythology, Diego is unique in that his age makes him nearly an elder. That age gives him greater powers and a higher rank in the Manhattan vampire hierarchy. It also brings profound worry in him since with each year that passes, Diego has seen the loneliness of those around him and has experience his own loss – his long time vampire companion was killed nearly two years earlier. With her passing, Diego sees himself on the way to becoming like the other vampire elders – devoid of passion for anything other than blood. Lonely. When Diego finds himself attracted to a human, however, he wonders if he can allow himself to experience her passion or if by doing so, he will doom himself to even greater misery.

Hmm...sounds like a vampire in need of heroine's touch. If you are a sucker for blood suckers, Caridad has created a world for you. For more information on Caridad, please visit www.caridad.com or watch her interview at www.romancenovel.tv.
Posted by Rene at 9:18 PM