It's like having a fly trapped in your ear canal 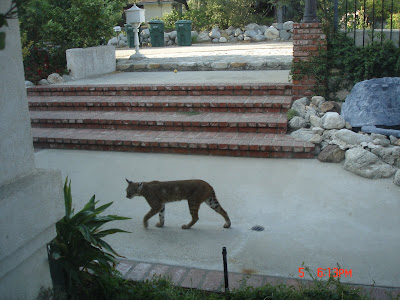 Everyone has been posting pictures of their kitties lately so I thought I would post this. I took this from my dining room window. I didn't dare get any closer since this kitty is a bobcat. I'm not sure where it was headed. I'm hoping he didn't set up home base in my side yard. Isn't he cute?

Anyway, last night I had a series of epiphanies about my WIP while I was doing dishes. I had my iPod on and a series of songs came on that triggered ideas about my characters and some world building issues I was having. I finished the dishes and sat down at my laptop to write. But hubby had the t.v. on to an Angel's game and the annoying sound of the babbling idiot announcers ruined my concentration so I moved to the office and worked on the desktop. I just got my WIP opened and had written two sentences when Thing (aka Voldemort) comes in and wouldn't stop talking. Any creative flow I had immediately evaporated.

I've realized that has been my main problem this summer. While I have more time to write, my focus is shot since I have this constant swarm of flies flitting about my head. If it isn't one thing, its another. The kids are either fighting or whining or begging for something. In Thing's case, she sees me sit down and focus on something not related to her and unleashes a torrent of verbal diarrhea that makes my ears bleed. This has been the worse summer for this kind of behavior. Combined with my own internal struggles with writing, this has really hampered me.

I've noticed I've been reading a lot. I contstantly have a book going. Reading has replaced writing since they both focus my mind in the same way (BTW, while I'm writing this, two of the kids have been talking non-stop to me although they can clearly see I'm doing something else). But I can hide with a book although lately that too has been impossible. Maybe it is a sign of age or perhaps having three active kids, but focus is a lot harder to maintain or even find.

Last summer I wrote a ton and I'm not sure what the difference is this year. Some of it is the ego-blow of my last book, but I generally recover quickly. I'm hoping this fall helps once I have all three (pardon me while I savor the words) in school.
Posted by Rene at 8:57 AM