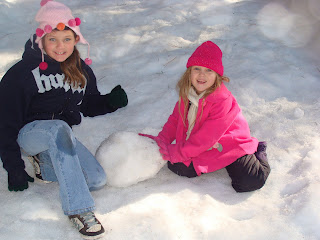 Our New Year's Eve was quite the spectacle...NOT. Hubby and I made it to midnight only because we were watching a movie. We aren't what you call party animals. We woke up this morning and took the girls to the mountains to play in the snow. They had fun but thankfully only lasted about an hour. It only takes us about 20 minutes to get the snow from our house. But as we were leaving the cars were starting to line up. Since snow is such an exotic substance to most southern Californians, it is quite the attraction. People can wait for hours to get up the mountain. Thus the advantage of living close by. We can get up there nice and early and leave before it gets too crowded.

Did any of you watch the Rose Parade? It was always a tradition for me as a kid to watch it. My kids are watching a replay now. And yes, the weather was as wonderful as they showed today. Highs in the mid-60's without a cloud in the sky. The temps in the mountains were in the 40's, so it was nice up there too. 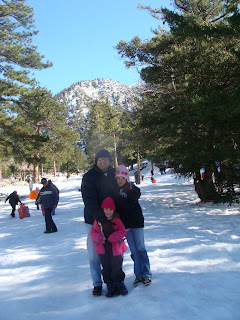 Hope your new year started as pleasantly!
Posted by Rene at 12:50 PM