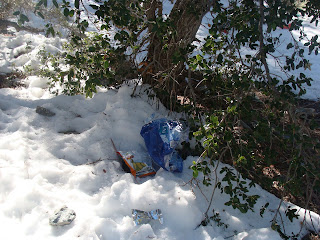 I am endlessly amazed at how disgusting people can be. We took the girls up to the snow again yesterday to do some sledding. I was shocked at the amount to garbage I saw. 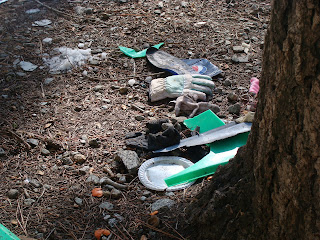 Why do people do this? People escape up to the mountains, leaving their urban wastelands behind to enjoy the snow and the beauty of the forest. And they treat it like a dump.

Are they really this lazy? This oblivious to what they are doing? Do they realize what a total lack of respect it shows for the world? It was heartbreaking. And if that wasn't enough, it got worse.

My daughter brought a snowball maker yesterday. She set it down to sled down the slope, a time frame of about 5 minutes. The damn thing got stolen. I looked around and sure enough, I saw a kid playing with it with his family. We aren't talking a toddler, he must have been about 11, old enough to understand that stealing is wrong. I told my husband and he went over to the group and got it back. The kid's mom told him to give it back. However, she was fine letting him play with it. She didn't seem to have a problem with the fact her son was playing with a toy that was not his. I guess it is only considered stealing if you get caught.

Anyway, my opinion of my fellow man is pretty low. I thought decency was more prevalent. But as my husband said, if people were basically decent, he would be unemployed (he's a lawyer). What do you think? Am I just seeing some bad apples or is the general population lacking in a moral code?
Posted by Rene at 8:02 AM