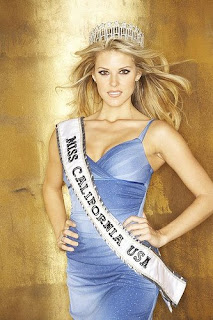 Trump has spoken. The badly coiffed owner of the Miss USA pageant has decided Carrie Prejean, Miss California, can keep her crown.

Wow, I was on pins and needles.

Ms. Prejean first made headlines at the pageant when she was asked about her stance on gay marriage. She answered that she believed marriage was between a man and a woman. Whoa, the backlash was immense, both in support and revilement of her statement. Hello?? Am I missing something here? Who cares? She spent most of the evening is revealing gowns, costumes and bathing suits. And they want her to say something profound and think it has an impact?

"It's the same answer the president of the U.S. gave, the same answer many people gave. It was probably a fair question because its asked of many people. If her beauty wasn't so great, nobody really would have cared. But that's not the way it worked out."

The Donald did not just put her in the same category as the president of the United States did he?

What bothers me is the importance played on this woman's physical appearance and how we as a society give it credence. I don't care if she is a PhD candidate in molecular biology, she is making her name by showing off her implanted breasts (yes, those are fake, courtesy of the Miss California pageant)in a plunging evening gown. Oh, and no, she is not a molecular biologist. She wants to be a teacher. Which kind of makes it worse. I'm not sure this is the woman I want influencing my daughters.

I suppose this is what gripes me the most. I'm a mother of two girls and I am trying to raise them to see physical appearance as something to admire but not something to base their identity on. Beauty is as beauty does and it isn't the true measure of a person. Sure, they should try to look their best and there is nothing wrong with being pretty, but it is a surface and nothing more, an element, not a definition of a person. In the long run, beauty is not going to get them what they truly want in life.

Unfortunately, these beauty pageants tell a different story. Did you know the Miss America pageant is the biggest provider of scholarships to women in the world? Doesn't that seem wrong to anyone? What kind of message is that sending to young girls? So your SAT's are off the chart and you earned a 5.0 gpa in high school, but what's important is your cup size. Trying to raise a daughter to put appearance in perspective is an almost sysiphean task. I can only do what I can and fight the good fight.

The second controversy surrounding Ms. Prejean is the scandalous photos which surfaced. She is topless in some of them, a situation which freaked the pageant out. How dare she be sexy for anyone else but the pageant. Her sexuality is reserved for the runway at the pageant. Miss California is a simmering pot of hotness, but heaven forbid she express it in anyway. She is the ulitmate look but don't touch girl. Because her sexuality belongs to the pageant. They put her on display, an alluring doll on a pedestal, ripe and attractive, and owned by another. She belongs to the pageant. It reeks of old fashioned patriarchy, harkening back to a time when we belonged to our fathers until marriage and then we were owned by our husbands. But Ms. Prejean used her sexiness for her own use, displaying her charms for her own gain and not that of the pageant.

I know, I'm probably making more of this than it probably is, but I can't help it. As a writer, I write strong heroines who have depth and individuality. And I hope life can imitate art in that instance.

What do you think of beauty pageants?
Posted by Rene at 11:50 AM