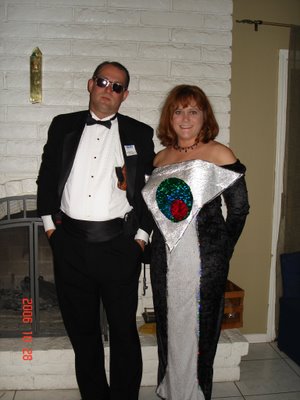 So here's the costume. Hubby was James Bond and I was a martini. I thought it turned out cute; I was pretty pleased. It was a bit hit at the party. I'm not really a party kind of person. The food was good, the drinks were awesome. They had casino tables for black jack, roulette & craps, but to be honest, I don't care much for gambling unless real money is involved. We were home before 10 p.m. Yeah, that's us, a wild and crazy pair.

Yesterday was one of those can't-catch-a-breath days. My daughter's soccer game was at 12:30. It was in the mid-80's yesterday and the girls played hard. Most of them ended up bawling at some point. Diva had a good game although she played half-back the first quarter then ended up forward the next. That was a little too much for her. Going from forward to half-back would have been easier. Anyway, she seems to be back in the swing of things with soccer. I think next year she will have a stellar year.

After soccer was the Village Venture 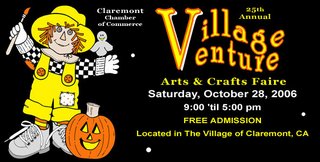 This is a huge street faire that takes over the downtown area. The booths sell out early every year and the array of artisans are amazing. The food isn't bad. I ate a risotto from a restaurant called Tutti Mangia. It was really tasty but that was pretty much the highlight. I finally realized the faire doesn't change at all from year to year. It is the same vendors offering the same items. Not that it is bad, but I came to the conclusion after going for 10 years, I could probably start skipping it. Part of my reasons for going is the tradition of going, but going with my kids makes it more effort than it is worth. They aren't bad, but they have no real interest in going. I might go next year without my kids. Maybe I will appreciate it more.

It is the last weekend before NaNoWriMo. I haven't given it much thought although in some ways it feels like a vacation. For a period of time each day, I will have to leave my daily routine and disappear into a fictional one. It could be the saving grace for a busy month.
Posted by Rene at 9:15 AM