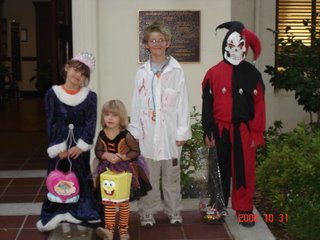 Halloween was a rousing success. The kids got a major haul of candy. This is them in front of City Hall after they trick or treated in the downtown area. The kid in the mask is my son's friend who pretty much invited himself along. Hey, the more the merrier. We went up to my folks' neighborhood that night and there were hardly any trick or treaters. People were giving my kids handsful of candy. And it was the good stuff. Full size candy bars and tubes of Mentos (I had no idea they actually had their own website...Hence I had to include it). The only odd thing was we had trick or treaters at our house. In the four Halloweens I've lived here, this was the first time. The street we live on has no street lights. At night, it is pitch black. Most of the houses are on one acre lots and are pushed back from the street pretty far. It is not an inviting place to go trick or treating. Anyway, we got home and hubby went outside to get the mail. When he came back in, he forgot and left the porch light on. Twenty minutes later we get trick or treaters. I had no candy. I was a bit irritated because these kids were well into high school. I think that is too old. But I gave them some of the candy my kids collected. They have enough they will never finish. Once the kids left, I turned the light off. At 9:30, after my kids have gone to bed, there is a knock at the door. Two teenage girls were trick or treating. Okay, it is so dark out there, it is a wonder they made it to my porch without falling on the steps. There is one light on in the living room. What in the hell were they thinking? I told them I had no candy. Talk about stupid.

The next day began NaNoWriMo. My kids also had the day off, the teachers had an in-service day. Luckily, my folks to the kids for most of the day and I got over 2500 words. Yesterday wasn't as good but today I'm on a good pace. Hope everyone else is doing well with Nano. I'm finding I have a lot more time than I thought I would. I've also discovered I can't sit in a chair and write for hours, my back won't allow it. So I've been breaking up my writing into sections with a set number of words per sitting time. Once I hit that goal I go and do something else. So far it seems to be working.
Posted by Rene at 10:43 AM