Come Take a Trip on my Airship 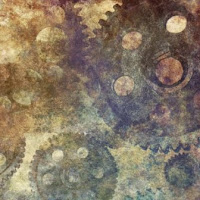 I woke up one morning and saw in my mind's eye a young woman standing before a massive pair of ornately carved doors. She was nervous, smoothing down the fabric of her new walking dress, intimidated by the sheer size of the home she was about to enter. The skies above her head are a dun with soot, smoke and steam. All around her are tall buildings, each with an airship port and the streets are crowded with steam-powered trolleys and bicycle-based taxi cabs. Neither she nor I knew why she was there, but I did know it has something to do with the world which had exploded so brilliantly in my head. As soon as the door opened and she saw the massive clock in the middle of the room with its shiny bronze gears I knew what was going on.

It was a steampunk story.
Crap.

Couldn't be an 18th century romp or an urban fantasy tale, two areas I am exceedingly familiar with. It couldn't be filled with fae and magic or highwaymen and aristocratic ladies. It had to be a whole new world I needed to create.

I like world building although I find it tricky. As a writer, it is essential to get in enough info to imagine your world to your reader without boring them with an infodump. It doesn't matter what your setting is, you have to make it vivid for your reader. Its doubly tough if the world you building doesn't exist.

I have that strike on me. Next, steampunk is its own full fledged subculture. It has conventions. It has shops. It has websites galore, all with people who do more than dabble. I have to admit, I feel like the new kid at school, worried that my shoes are wrong or that I've done the unpardonable faux pas that will never make me any friends. I'm not ignorant of the movement but I'm certainly not a practitioner. My subculture now is the soccer/baseball mom crowd.

But I'm a writer so I must follow my story where it goes. And if it is steampunk, then I need to make myself familiar with those elements. What I don't want is a story which is based on buzz words. I ask a lot of whys. I want logic in my story and I want the plot to include the elements of steampunk rather than be window dressing for dirigibles, goggles and steamworks. My world has a Victorian flavor, I like the structure of the Victorian view, I like the attention to manners and behavior, a beautiful, fragile society ripe for destruction by a subversive element. Or at least a serious disruption.

I'm having a lot of fun with it. I'm a writer because I enjoy it. I love delving into another world and immersing myself into a place so different from my own. And while I have been researching, I've discovered some great music, a new author I'm eager to read and jewelry I could go broke on. So its all good.

Have you ever been struck by a story but been intimidated by the setting? Did you pursue it or did you decide it was too much to handle?
Posted by Rene at 8:19 AM