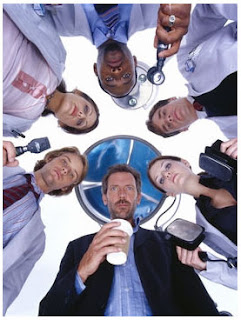 I just started watching "House" this season and I'm really hooked. I bought the first two seasons on DVD and my husband and I have been watching them. Hubby has a thing for Drs. Cameron and Cuddy. I'm amazed with the characters and the writing. House is uncompromising as a character. He is so full of qualities we don't admire and yet we can't help watching him. He is an awesome anti-hero. And he doesn't just have quirks, he has full-blown issues. Big, ugly issues we should dislike him for, yet we root for him everytime. The writers have included a great ensemble to surround him, all of them with big issues as well, all of them flawed. House doesn't tiptoe around them either, he is like the proverbial salt in the wound. I love it. My mother loves the show although House himself makes her uncomfortable, particularly the Vicodin addiction. She doesn't like it, but she watches anyway.

I want to write like that. I want to create characters which make people cringe. Its tough, though. Our natural tendency is to create characters who are sympathetic and particularly if you are writing romance, its even tougher. A compelling character is rarely a likeable character. How many times have you seen a movie and come away more interested in the villain than the hero? Goodness is boring.

I think the balance for us that write romance or most genre fiction is to create a good guy with flaws deep enough to create uncomfortable conflicts. I try to start out with a character with an issue so deep it seems unsurmountable then create a story which takes this character up and down a roller coaster of redemption.

What do you do to make your character compelling? How far are you willing to go to make that character difficult?
Posted by Rene at 5:16 PM

Email ThisBlogThis!Share to TwitterShare to FacebookShare to Pinterest
Labels: writing