Christmas Presents Under the Tree 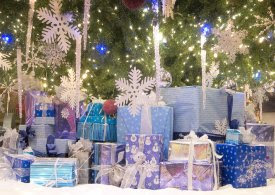 When I was a kid, I loved the moment when my mom brought out the Christmas presents and tucked them under the tree. I'd spend a week shaking and trying to guess what was in them. I found real quick I couldn't do that with my own kids. The minute the gifts are under the tree, they pulverize them. So the presents do go out until Christmas Eve after they go to bed. Drives me crazy because I've always thought of Christmas presents as part of the decoration. I'm hoping things will change by next year. Besides, my closet is bursting with stuff. I want my closet back!

So, when you were a kid, did you get one big present and then a few smaller ones? Didn't you just hate opening clothes when you were a kid? And then when you made "the face" you're mom would get mad? I don't get mad at my kids when they are disappointed with clothes. I know well-meaning relatives think its the right thing to do, but I think they need to understand that the kids aren't going to be excited by their gift. Unless it has marabou and sequins, my daughters are going to ignore it. Doesn't mean they don't like the clothes, but clothes don't move around and entertain them.

My kids always get too much stuff. Most of it isn't expensive. Heck, I bought a bunch of it on clearance during the summer. But they generally get one expensive present. My son and my youngest daughter are getting Nintendo DS Lites (my middle daughter already has one). Son wanted a Wii. Afraid life is full of disappointments. Although, I'm still going to try again this weekend. I think the flush of victory in getting one would be my reward.

My husband took this week off and is home. That's all I'm going to say about that.

I need to work on some revisions today, I don't have many. By the way, the ms I wrote is a contemporary fantasy romance which takes place in Los Angeles and the world of the fae. No, Kelly, not a historical. As much as I'd like it, my historicals aren't what are garnering interest.

Last night I got my packet of entries for the Golden Heart. I've never judged before so I'm excited. My attitude is to go in assuming the best. I don't like nitpicking on my own stuff and I don't want to do it to anyone else. I didn't enter myself, I've retired from the contest circuit until I can enter the RITA.
Posted by Rene at 7:35 AM