I'm kind of a believer in karma. We reap what we sow and all that stuff. People tend to get their reward, although it isn't always what they thought. So where is all this philosophy headed? Did I get a brand new car? Did Berkeley offer me a 10 book deal? No, but it is still pretty cool.

I cleaned the top of my fridge, one of those tasks nobody likes to do. But I was rewarded. I found TWO unopened boxes of Girl Scout cookies.

I apply the karma idea to everything, especially writing. I've yet to meet a writer who has gotten published that didn't put his or her dues in to get published. Except for Pamela Anderson, but she is suffering some nasty karma these days. Anyhow, we get out of writing what we put into it. And sometimes it isn't the brass ring of publishing. I suppose that was the biggest lesson I learned from Nano. While I want to publish more than I want most things, I write for the pleasure of it. It was something I'd forgotten.

This weekend Susan Squires and her husband Harry spoke to our chapter. I could really gush about these two authors, they are so warm and engaging and so generous with their knowledge and experience. Listening to them, I really absorbed a great deal. We only had 4 members show up (me included) so the setting was very intimate and I could have sat there all day talking to them. Oh, now I'm gushing. Anyway, Susan's books are truly books she loves to write. If anyone has read her, you know she is not writing to anyone else's formula. Sometimes it works, sometimes it doesn't but it is hers. Same goes for Harry. His book "What Rough Beast" was terrific and a book I'd love to see go into a series. But it isn't something you are going to find anywhere, its a book he believes in. What I took most from their talk is believing in your project and realizing it may or may not sell right away. But if the writing is good, it will sell eventually. As I said, I believe in karma. 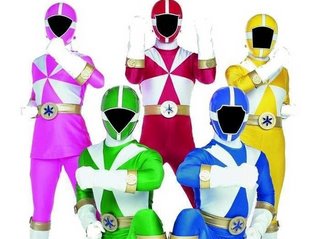 Thing has decided that Power Rangers rule the universe and should actually be the only thing on television. It doesn't matter what dopey version it is (there are a gazillion) she watches them all. Amazingly, she wants to be a Red Power Ranger rather than one of those prissy Pink ones. She runs around the house doing Power Ranger moves, all accompanied by loud screaming. Ah well, keeps her out of the flour.
Posted by Rene at 6:16 PM