The Diva and Scooter 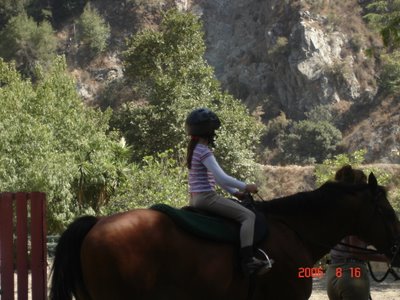 The Diva has a new man in her life. He's hairy and smells bad. He's a thirty-two year old vegetarian and he goes by the name Scooter.

My darling daughter has spent the afternoon and evening talking about Scooter, drawing pictures of Scooter and mooning over Scooter as if he were the cover boy on Tiger Beat.

Yes, Scooter is a horse. After she hounded me like a toothache, I finally got her into riding lessons. It took awhile, not to many trainers are willing to take on a 6 year old, particularly English style which is what I wanted her trained on. I found a stable not to far from my house tucked into a beautiful canyon. The temperatures were nice and the instructor was very sweet. The Diva was nervous at first, I don't think she has ever been that close to a horse before. But she helped groom him, picking his hooves and brushing him, but I could tell she was afraid. However, she has enough pride to square her shoulders and proceed.

Then it was time to mount. She did so and didn't seem scared at all. Although the lesson was only supposed to last a half hour, the trainer worked with her for an hour. She held a lead rein and walked with them through the ring. But Diva had to control him. He's a good horse and took to commands very easily. By the end of the lesson she was completely comfortable.

I was very proud of her. Too often we shy away from things which make us nervous or frighten us, limiting our scope of experience. But her desire to learn to ride was enough to make her push through her fear and approach the horse. I have a feeling we are going to be doing this for a long time. She seems to have a natural affinity for it. And she is willing to learn.

Today we start her other love: soccer. She's moved up a division which is a good thing, she is far too aggressive for the younger girls. She's pretty excited about that. In so many ways, she is a fun kid to have around. Her delight in activity thrills me. I hope she is able to keep this enthusiasm for the rest of her life.
Posted by Rene at 9:29 PM