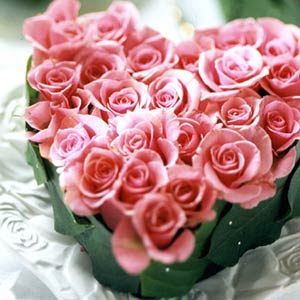 I hope everyone is having a heart-filled day. This was not one of my favorite holidays as teen and up since I could never keep a boyfriend around this time. I've never had a boyfriend for Valentine's Day. My mom always got me something and so did my dad, it was one of the few holidays he actually went and bought something without urging. I have had a fiance and husband for the holiday. Many years ago I could expect a box from Victoria's Secret. He did get me a bottle of Dom Perignon one year. Now, I tell him to skip it. I don't need candy and flowers to know how he feels.

But here's a little treat. My local paper has been running these cute little stories on the front page and I thought I'd post a couple of them.

It was about 4 p.m. on Sept. 2. I was driving down Riverside Drive in Chino, when an ambulance approached from the other direction. I veered to the right, and in doing so, I almost ran into this white truck coming out from the intersection.
I pulled over to apologize to the driver and let him know I did not see him. We started talking and exchanged numbers.

The following week he called me and asked me if I would like to go out to dinner. I thought why not, we had great conversation. We found out that we have so much in common, and we've been together since then.

I never thought I would find that special person the way I did, but he completes me. We are very happy and enjoy every day we have together.

I really liked this one:

I was at work one day when I opened an e-mail from a woman who also worked for my company. She was advising me that she would stop sending any further company leads.
I was already having a bad day, so I looked her up and found that she was working in an office in Connecticut. I called her and asked, not too nicely, what she was talking about. We talked for several minutes, until we discovered there was another person with my name who worked for our company.

I liked her voice, and soon we discovered that each of us was divorced after 20 years. Also, our daughters were the same ages.

We grew up in adjoining towns. Had my father not moved to California, we would have gone to the same schools in New Jersey. We were both Highlanders and both in the band in high school, although in different states.

When I asked for her home number she surprised herself and gave it to me. When she hung up the phone, a co-worker next to her said that she better watch out, someday she could end up marrying me.

We just celebrated our fifth anniversary. That was the best misdirected e-mail I ever got.

Have a lovely day and eat lots of chocolate.
Posted by Rene at 8:16 AM