Went to a Garden Party

It actually wasn't a garden, but the song popped in my head. Hubby and I went to a party near the beach. It was at this nice, ummm, not sure what you call it. It isn't exactly a hotel but a time-share resort. Anyway, it's very nice and the have this great fountain. 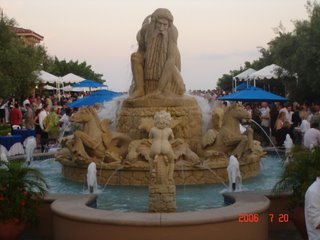 The food is great and the alcohol free. And no kids. What more could a gal want? I had my nails done and I spent the evening thinking I had something on my fingers but it was actually nail polish.

Having been off cheese for over a week, I hovered around the cheese spread. They had so many wonderful cheeses. One stand was handing out prime rib sandwiches. Hubby camped himself in front of it. I don't know how many he had.

I'm a people watcher so I spent a great deal of time just sitting and staring. I was one of the shortest people there, a definite disadvantage when trying to push your way to a bar. Since this was business party, there were people trying to broker deals (the host was a commercial real estate company). They had their cell phones out and were cornering each other, trying to make money. It's interesting how dominant that feeling was. Its a volatile and brutal business where only the most tenacious survive. Hubby's fringe dweller. Lawyer's are a necessary evil to this business so he's largely immune to it. But they put on a great party. There was sushi and pasta bar as well. There was also a silent auction. I pushed hubby to bid on a new iPod and he bid on some Gucci earrings. I'm rolling my eyes on that one. They were also auctioning off a puppy. I, who am not a big dog fan, would easily have exchanged one of my kids for this little shi-tzu. Well, that isn't a fair comparison since I would trade one of my kids for a cup of water. Anyway, he was precious. And expensive. 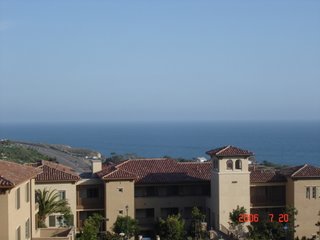 Here is the Pacific Ocean in all its blue-glass glory. I really adore this area. But I'd have to sell books at the same rate as Nora Roberts to live here. The traffic is horrendous as well. Forget commuting, a trip to the market is guaranteed a 30 minute drive. Anyway, had a nice time. The kids are at my parents house and hubby is gone, so I'm going to relax and enjoy my morning.
Posted by Rene at 7:31 AM